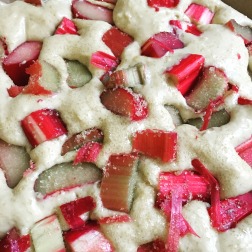 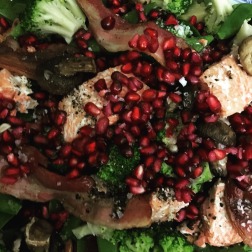 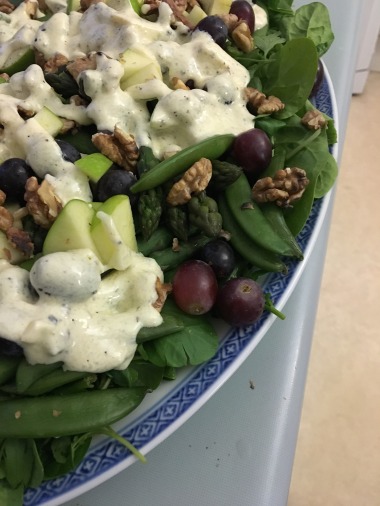 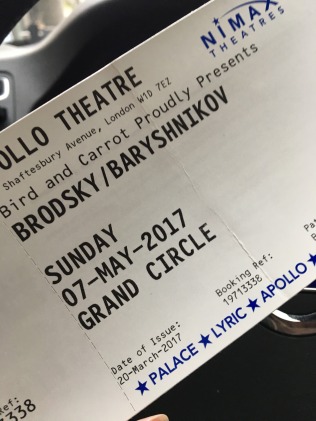 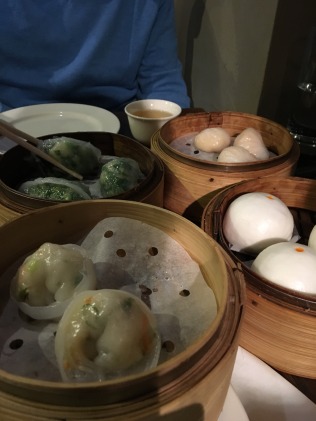 I went to see Baryshnikov reading Brodsky at the Apollo the other day. Completely sold out and packed full of Russians. Misha, whose beauty has in no way been diminished with age (and he took his clothes off to prove it), read his dead friend’s poems, sitting in front of and dancing inside of a kind of greenhouse that looked like an abandoned railway station somewhere in Russia. The surtitles glanced off the top of the building like smoke, words of emptiness and despair, of pain and loneliness. And, of course, Baryshnikov is not young, the Soviet Union, from which both he and Brodsky escaped, is gone, but so is so much that was wonderful about Russia and the whole performance seemed to be about loss and decay.  This is what I wander around feeling all the time and for that hour and a half I was not alone. When everyone jumped to their feet with a roar, tears streaming down their (our) faces, I was one of the people who understand this abyss of sorrow in which there is great beauty. I know – in England I’m a weirdo. But in Russia I’m normal. Hooray! It’s SUCH a relief to be allowed to bleak!

There’s a Russian word “tosca” тоска with the stress on the a, unlike the opera heroine, that means a kind of melancholic longing. It doesn’t have an English equivalent but you can use it casually for nostalgic sadness or just a sense of bleakness, sadness. If you’re staring out of the window at the endless snow and someone says, “What’s up?”, you can just say; “тоска”.

That emotion isn’t really allowed in England. There is this feeling in the West that somehow we’re supposed to be happy and content. We’re supposed to find the right partner and a fulfilling job, to keep healthy, stay attractive. Then we feel crap when we fail (as we must). So many of my patients, and, I’m sure, everyone else’s, are mainly appalled by their own failure to have a blissfully perfect life. Russians or, at least, Russian poetry and literature, seem to understand that loss, suffering and crushed hopes and dreams are what life IS. They mourn openly. Or, possibly, ‘it’ mourns openly – the canon.

The night before this an old friend (who lives a life so conventional it’s actually weird and who has tried with all his might to repress his existential grief behind a facade of money and familial duty) sent me a Yevtushchenko poem – Goodbye Red Flag. The last line is “and I weep” “И плачу”. He weeps for the loss of something that he never wanted or loved but the loss is great anyway.

ANYway, mad Russian stuff aside, look at the fabulous dim sum we had before the Baryshnikov. Chinatown being delicious – the fug of smells is so fantastic as soon as you get near. Couldn’t pay for it though because my son had taken my purse out of my bag to get twenty quid for bevs the night before. I am so unsuspicious-looking (never, ever get stopped or searched ever anywhere) that it wasn’t a big deal. Went back to pay later. Oh, but CUSTARD BUNS. Can I just say CUSTARD BUNS.

The rhubarb cake is the German one I’ve made before and the recipe is a few blogs down. But I can’t stop making it. It’s so beautiful and stupidly delicious. I’ve added vanilla essence and yoghurt to the recipe lately. Seriously, it’s just any simple cake recipe with grated lemon rind in it and you push a lot of rhubarb in. Bliss.

The other salad I sort of Waldorf’d. Spinach leaves and spring onions, watercress and probably some grean beans or peas or something, but then I thought I’d lob some chopped apples in (do not peel them, do not peel anything) and grapes. Then toasted some walnuts and made a yoghurt dressing. Yoghurt, olive oil, lemon juice, crushed garlic, salt and pepper. Oh, and mustard! I know a real Waldorf salad has cream in the dressing but that just seems gross. Then I put sausages on top but it wasn’t pretty so no photo of that. Could have been any meat or fish at all. I live off these salads.

Therapy for lasting change via Skype or even email: annablundy@gmail.com