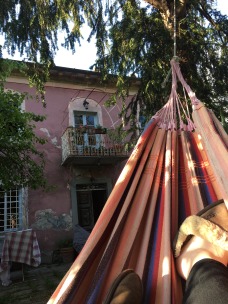 Omar Sy, just gratuitous because I love him. Look how handsome! I kind of force myself to dream about him by thinking about him as much as possible before I go to sleep. Or maybe I’m kind of hallucinating since I’m often quite pissed at that point. ANYway, happy birthday to me, I am very old indeed. I made the Honey and Co. cheesecake, oh God, it’s fantastic. So, I’m in rural Italy so whatever complicated pastry they use who even knows and you can’t get it here. So I made crispy vermicelli (boil, then fry in butter until golden and crispy) and used that as the base. I put some honey in the fying pan too. The cheesecake was Philadelphia with vanilla essence, 50g of crumbled feta and some honey. Then toasted pine nuts (didn’t have pistachio nuts) and pomegranate seeds. Heaven. Went to Forte dei Marmi and the Augustus hotel. My birthday’s on the 11th but Boris Johnson and the other G7 foreign ministers were in it that night so I had to postpone birthday until the 12th. We were the only guests on the first night of the season and the staff weren’t tanned yet, putting the canopies up on the beach tent things, painting all the white slatting, doing the flower beds. We know the owners which always makes me think there’ll be a discount and there never is, but somehow it’s comforting to wander around in a bikini and see Titti in his tweed suit, tie, brogues and v-neck cashmere (Italians are still freezing when English people are swimming in the sea and sunbathing) directing builders around the place, air heavy with orange blossom or honeysuckle or jasmine or something that smells of summer and laziness. The dogs were allowed on the beach as it was just pre-season and they went nuts fighting the growling surf.

Went out for oysters to celebrate being ridiculously fucking old and they served wine in a green plastic bucket, the kind you make sandcastles out of. Pleasing. Had a massage from a Chinese lady who works the beach all summer, 10-20 people a day after Easter (just us and the very beautiful German family next to us, though not very near across the meticulously raked sand [saw the blonde afro boy doing the raking] with a newborn baby [jealous] on April 12th) and was thinking about being touched. I’ve read about massages for the very elderly in homes and how wonderful it is just to be touched by another person. Was feeling this myself and melting under the bliss. Very rare for me these days and strangely lovely. I was wondering about the incredible loneliness of the mentally ill and how rarely touched most long-term mentally ill people are. It must be important for sanity. Assuming one isn’t a physical abuse victim, but maybe even then, when it’s controlled and seen.

Therapy via Skype or even email: annablundy@gmail.com

Honorary psychotherapist with a Masters in Psychoanalytic Theory and another in Psychodynamic Clinical Psychotherapy. Novelist - Author of the Faith Zanetti quintet - The Bad News Bible, Faith Without Doubt, Neat Vodka (US - Vodka Neat), Breaking Faith, My Favourite Poison. Also a memoir of my father, Every Time We Say Goodbye and my most recent thriller - The Oligarch's Wife
View all posts by Anna Blundy →
This entry was posted in Food to make you happy, psychotherapy, Uncategorized and tagged cheesecake, feta, forte dei marmi, Honey and Co., La Casa Rosa, labradors, loneliness, massage, omar sy, oysters, pomegranate, the augustus, vermicelli. Bookmark the permalink.